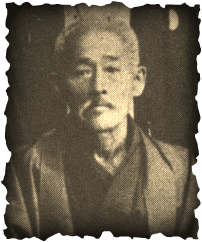 The development of Gōjū ryū goes back to Kanryo Higashionna, (1853–1916),
a native of Naha, Okinawa. Master Higashionna began studying Shuri-te as a child. He was first exposed to martial arts in 1867, when he began training in Monk Fist Boxing (Luohan Quan) under a master named Aragaki Tsuji Pechin Seisho, a fluent Chinese speaker and translator for the Ryukyu court. In 1870, Aragaki had to go to Beijing to translate for Okinawan officials. It was then that he recommended Higashionna to another master named Kojo Taitei, who he began training under. With the help of Taitei and a family friend, Higashionna eventually managed to set up safe passage to China, lodging, and martial arts instruction. In 1873 he left for Fuzhou in Fujian Province, China, where he
began studying Chinese boxing under various teachers.

In 1877 he began to study under a kung fu master called Ryū Ryū Ko (or Liu Liu Ko, or To Ru Ko; the name is uncertain.) Tokashiki Iken has identified him as Xie Zhongxiang, founder of Whooping Crane Kung Fu. Zhongxiang taught several Okinawan students who went on to become karate legends.

Higashionna returned to Okinawa in 1882 and continued in the family business of selling firewood, while teaching
a new school of martial arts, distinguished by its integration of gō-no (hard) and jū-no (soft) kempo into one system. Higashionna's style was known as Naha-te. Gojukai history considers that Chinese Nanpa Shorin-ken was the strain of kung fu that influenced this style.

Higaonna Morio noted that in 1905, Higashionna Kanryo sensei taught martial arts in two different ways, according
to the type of student: At home, he taught Naha-te as a martial art whose ultimate goal was to be able to kill the opponent; however, at Naha Commercial High School, he taught karate as a form of physical, intellectual and moral education.

In 1915 Miyagi and a friend Gokenki went to Fuchou in search of Higashionna's teacher. They stayed for a year
and studied under several masters but the old school was gone (Boxer Rebellion 1900). Shortly after their return, Higashionna died. Many of Higashionna's students continued to train with him and he introduced a kata called
Tensho which he had adapted from Rokkishu of Fujian White Crane.

In 1929 delegates from around Japan were meeting in Kyoto for the All Japan Martial Arts Demonstration.
Higashionna asked Miyagi to go as his representative; Miyagi was also unable to attend, and so he in turn
asked his top student Jin’an Shinsato to go. While Shinsato was there, one of the other demonstrators asked
him the name of the martial art he practiced. At this time, Miyagi had not yet named his style. Not wanting to
be embarrassed, Shinsato improvised the name hanko-ryu ("half-hard style"). On his return to Okinawa he
reported this incident to Chojun Miyagi, who decided on the name Gōjū-ryū ("hard soft style") as a name for
his style. Chojun Miyagi took the name from a line of the poem Hakku Kenpo, which roughly means:
"The eight laws of the fist," and describes the eight precepts of the martial arts. This poem was part of the
Bubishi, a classical Chinese text on martial arts and medicine. The line in the poem reads:
Ho wa Gōjū wa Donto su "the way of inhaling and exhaling is hardness and softness," or "everything in the
universe inhales soft and exhales hard."

In March 1934, Miyagi wrote Karate-do Gaisetsu ("Outline of Karete-do (Chinese-hand)"), to introduce karate-do
and to provide a general explanation of its history, philosophy, and application. This handwritten monograph is
one of the few written works composed by Miyagi himself.

Miyagi's house was destroyed during World War II. In 1950, several of his students began working to build a
house and dojo for him in Naha, which they completed in 1951. In 1952, they came up with the idea of creating
an organization to promote the growth of Goju-Ryu. This organization was called Goju-Ryu Shinkokai
("Association to Promote Goju-Ryu"). The founding members were Seko Higa, Keiyo Matanbashi, Jinsei Kamiya,
and Genkai Nakaima.

There are two years that define the way Goju-ryu has been considered by the Japanese establishment: the first,
1933, is the year Gōjū-ryū was officially recognized as a bud? in Japan by Dai Nippon Butoku Kai, in other words,
it was recognized as a modern martial art, or gendai bud?. The second year, 1998, is the year the Dai Nippon Butoku kai recognized Goju-ryu Karatedo as an ancient form of martial art (koryu) and as a bujutsu. This recognition as a koryu bujutsu shows a change in how Japanese society sees the relationships between Japan, Okinawa and China. Until 1998, only martial arts practiced in mainland Japan by samurai had been accepted as koryu bujutsu. 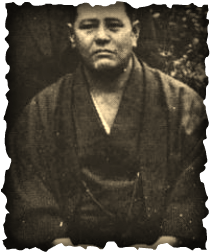 Miyagi believed that "the ultimate aim of karate-do was to build character, conquer human misery, and find spiritual freedom".

He stated that it was important to balance training for self-defense with "training the mind, or cultivating the precept karate-do ni sente nashi ('there is no first strike in karate')"; he also emphasized the importance of "cultivating intellect before strength".

Miyagi chose the name Goju-ryu ("go" meaning "hard" and "ju" meaning "soft"), to emphasize that his style integrated both "hard" and "soft" styles. Goju applies not just to karate, but to life in general; only hardness or only softness will not enable one to deal effectively with the fluctuations of life. When blocking, the body is soft and inhaling; when striking, the body is hard and exhaling.